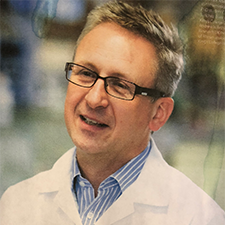 Professor Andrew Cope graduated in Medicine from the University of London with First Class Honours. After training in general internal medicine at Northwick Park Hospital, The National Hospital for Nervous Diseases and the Royal Brompton Hospital, he trained in rheumatology with Professor Sir Ravinder Maini and Dr. Barbara Ansell CBE. In 1990, he was awarded a Wellcome Trust Clinical Training Fellowship, studying for a PhD in Cytokine Biology with Professor Sir Marc Feldmann at the Kennedy Institute of Rheumatology.

Following a postdoctoral fellowship with Professor Hugh McDevitt at Stanford University, California, studying transgenic models of autoimmunity, he returned to the Kennedy Institute to set up his own laboratory.
In 2005 Andrew Cope was appointed Reader in Molecular Medicine at the Kennedy Institute of Rheumatology, and in 2008 was recruited to the Arthritis Research UK Chair in Rheumatology at King’s College London, and is currently
Head of the Centre for Rheumatic Diseases at King’s. The Cope lab is housed in the Centre for Inflammation Biology and Cancer Immunology (CIBCI) on the Guy’s Campus, Faculty of Life Sciences and Medicine, King’s College London.

Research focuses on two key themes: defining aberrant pathways of T cell activation and differentiation in the context of chronic inflammatory diseases, such as rheumatoid arthritis; understanding how allelic variants of immunologically important genes contribute to autoimmune disease pathogenesis. His clinical research interests revolve around aspects of inflammatory arthritis, including very early inflammatory arthritis and disease remission states. He is currently chief investigator of the RA prevention trial – the APIPPRA study. Prof Cope joined the Board of Trustees of the Kennedy Trust for Rheumatology Research in 2015.