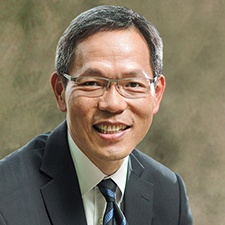 Professor CS Lau graduated MBChB from the University of Dundee in 1985. In 1992, he joined the University of Hong Kong (HKU) as Lecturer in Medicine and successfully rose through the ranks to Senior Lecturer (1997) and Professor (2000). In 2007, he returned to his Alma Mata to become the first Chair of Rheumatology of the College of Medicine, Dentistry and Nursing Studies. In 2010, however, he began his second tenure at HKU as Chair Professor and later Daniel CK Yu Endowed Professor in Rheumatology and Clinical Immunology in 2014.

Professor Lau has been a major player in rheumatology in Hong Kong and beyond. Locally, he was President of the
Hong Kong Society of Rheumatology (1997 – 2001) and Chairman of the Hong Kong College of Physicians Subspecialty Board in Rheumatology, Immunology & Allergy (2001 – 2007). In 2001, he founded the Hong Kong Arthritis & Rheumatism Foundation, the first and only local charity organisation that raises funds to support the psychosocial and therapeutic needs of patients with rheumatic diseases.

Regionally, he co-founded the Asian Congress on Autoimmunity, Huaxia Congress on the Management of Rheumatic Diseases and Ten Topics in Rheumatology in Asia. Notably, he was President of the Asia Pacific League of  Rheumatology Associations (APLAR) between 2006 and 2008. In addition, Professor Lau led the development of the Region’s first treatment recommendations for rheumatoid arthritis and axial spondyloarthritis. In 2011, he co-founded the multi-national, multi-centre Asia Pacific Lupus Collaboration. Beyond the Asia Pacific region, Professor Lau is a member of the Outcomes in Rheumatology, European League Against Rheumatism (EULAR) Scientific Committee and EULAR Task Force on Rheumatoid Arthritis Treatment Recommendations.

Beyond rheumatology, Professor Lau was Assistant Dean in Information Technology and Planning (2001 – 2004), Assistant Dean in Education and Student Affairs (2005 – 2007), Director of the Bau Institute of Medical and Health Sciences Education (2010 – 2018) and Associate Dean for Teaching & Learning (2013 – 2018). In 2016, he co-led the reform of the MBBS Curriculum incorporating a one-year enrichment experience for all medical students. Professor Lau was President of the Hong Kong  Academy of Medicine (2016 – 2020). As President, Professor Lau has an important role in defining the institution’s strategies and consensus building amongst the Academy’s 15 constituent Colleges. Besides its academic role, the Academy is an entrusted advisor to the Government on multiple health related policies. Professor Lau sits on numerous strategic committees / working groups of the Food and Health Bureau, Hospital Authority and Department of Health in Hong Kong.